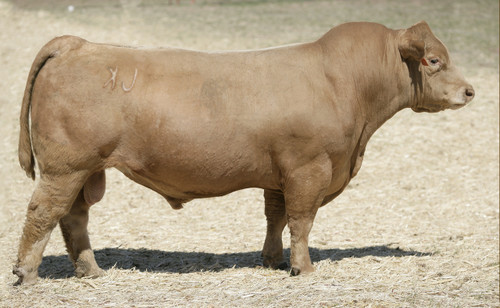 Yello Repo has out produced himself with his second set of calves. His calves, bulls and heifers are stout made, deep bodied and big boned. They are exceptionally sound and have lots of look in an easy keeping package. He has produced as many good, top selling steers as he has daughters.

He is impeccably bred. His sire is the straight Hoo Doo bull George, and he’s out of the $24,000 Power Plus dam purchased by Champ and Neal Ray Davis. She is a great cow. She is also a full sister to Power Alert, the $16,000 bull that sold to Jr. Stelzer. Several other full sibs to this mating have been top Cream of the Crop sellers. His grand dam is one of the top donor cows to ever be used on the place, the Triangleton 31-91 donor. She has produced over $100,000 in progeny sales, including a $14,000 daughter in last year’s sale.

Proven sire with lots of both steer and maternal producing ability.