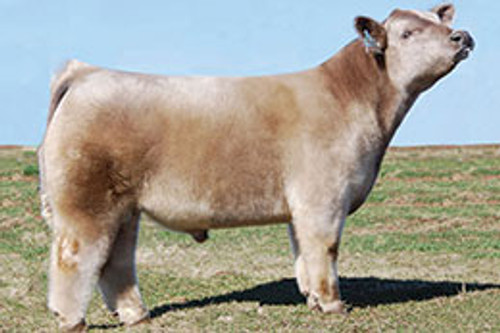 Blizzard daughters are some of the most productive Charolais influenced mothers in existence. The Scotten Bros. in Missouri have raised three promotional sires out of their Blizzard daughter. These sires include Smoke N Mirrors, Smokin Bob and Young, Wild & Free. In addition the dam of several state fair champions; Grand Champion Steer, Indiana State Fair, Grand Champion Steer, American Royal and several Texas Champions. Raising over $500,000 in progeny sales. Bill Thorne owns the highest selling Blizzard daughter to sell from the K-Bar heard. Use Blizzard to moderate frame, add belly, add muscle and keep them great looking. Blizzard will make the most valuable smoky daughters you will ever own. DECEASED.

**PICTURES ARE NOT OF THE ACTUAL BULL**

Answer To No One